An introduction to the Paralympic Sport of Boccia

Boccia (pronounced bot-cha) is a Paralympic sport with no Olympic equivalent and is similar to bowls. It is a target ball sport which tests both muscle control and accuracy. The term boccia derives from the Italian word meaning "bowl" and on the continent bowls is often referred to as Bocce.

Boccia has roots in ancient Greece and Egypt and is thought to be one of the first games played by mankind. It is thought that during these times, large stones would have been used. The sport was originally designed for people with Cerebral Palsy but is now played by people with a wide range of disabilities. Nowadays over 50 countries play Boccia, making it the fastest growing disability sport in the world and in 1984 Boccia was introduced into the Paralympics. All these countries are members of and governed by the Boccia International Sports Federation (BISFed). At recreational level Boccia is also played by people with a range of physical, sensory and learning disabilities.

How Boccia is played

From a seated position, players propel balls to land as close as possible to a white marker ball, known as the Jack. Two sides compete as individuals, pairs or as a team of three over a set number of ends (4 for individuals and pairs, and 6 for teams).

Each side plays six balls (red or blue) each end. After each end, the athlete, pair or team with the ball closest to the jack receives 1 point plus an additional point for each ball closer to the jack than their opponent's.  Points are accumulated over the course of a match to find a winner. Although simple to get started, the tactics of the sport offer both tension and excitement as the game plays out. Balls can be rolled down a ramp, thrown or kicked. If a player is unable to release the ball with their hands, they can use assistive devices, such as a head pointer.

The season in Northern Ireland runs on an annual basis from September-June for the National competitions. The Northern Ireland Boccia Pairs Championship which is organised by Disability Sport NI provides monthly matches between October-June each year in various locations across Northern Ireland. The league is open to teams of three and made up of players with physical disabilities including one person with Cerebral Palsy or Muscular Dystrophy. In Northern Ireland the Individual Boccia Championship also runs on a monthly basis and provides National competition for players who meet BisFed classification criteria BC1 - BC5. Matches in the competition take place on a monthly basis in Antrim Forum Leisure Centre.

The Antrim Forum Leisure Centre was the venue for the UK Boccia Championships over the weekend of 15th - 16th June 2019. Disability Sport NI, as the lead organising body for Boccia NI, were the hosts in partnership with Boccia UK, Antrim and Newtownabbey Borough Council and sponsors TBC Conversions. The Championships saw the best 32 players from across the UK come together and compete for the top spot across the four classifications BC1-BC4.

Northern Ireland was represented by five players across the four classifications - William Graham (BC1); Claire Taggart (BC2); Scott Cromie (BC2); Robyn McBride (BC3); and Jayne Milligan (BC4). 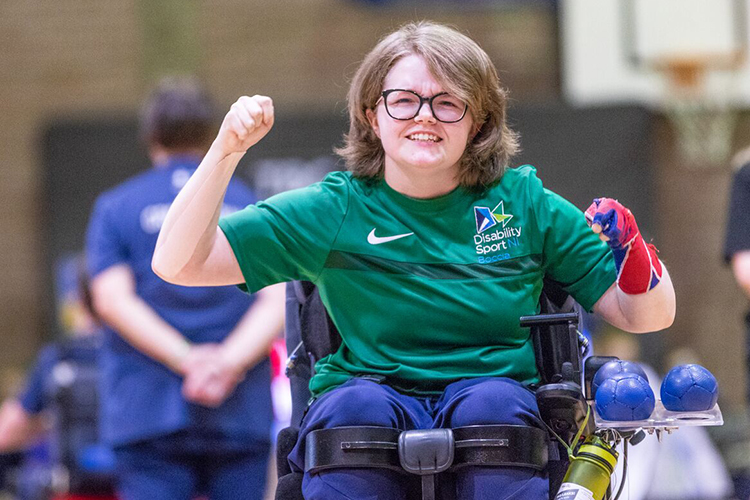 Whilst it was Scotland’s athletes that topped the medal table this time, it was Northern Ireland’s Claire Taggart who got the biggest cheer from the home crowd when she beat England’s James Clowes 4-0 in the Gold medal match. The home crowd were hoping that Scott Cromie could also bag a medal in the bronze medal match but it wasn’t to be as England’s Reshad Saraj finished on top.

The NI team had the opportunity to play against world ranked players and this has been a great experience for the pathway players who demonstrated that they are pushing hard to improve. With just over a year to go to the Word Championships in Tokyo, being tested on home soil is great for the World Class Programme athletes too.